Posted on December 8, 2014 by Jeremiah Graves 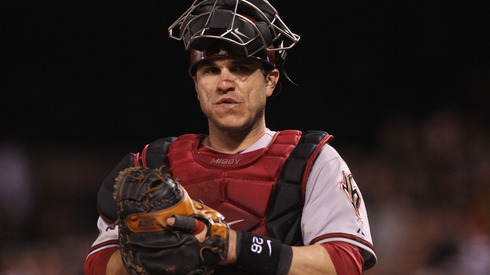 The trade winds are blowing in San Diego as the rumors coming out of the Winter Meetings indicate that Arizona Diamondbacks’ catcher, Miguel Montero might be on the move.

Ken Rosenthal of FoxSports.com is reporting via Twitter that the Cubs and Diamondbacks are in the midst of discussions to move Montero to Chicago in exchange for pitching.

Rosenthal’s latest update indicates that the two teams have been working on this trade for weeks and that a “deal appears to be getting closer.”

It was previously reported that the Diamondbacks had a deal in place to move Montero to the Dodgers earlier this offseason, but the trade was nixed by team owner Ken Kendrick. Tony LaRussa, chief baseball officer for Arizona, has since denied those claims.

Regardless, it appears as though Montero’s days in the desert are numbered.

Montero, 31, was an All-Star in 2011 and is in the midst of a five-year, $60 million contract extension he signed prior to the 2012 season. He still has three years and $40 million remaining on that deal.

After two consecutive years of below-average production, it makes sense that the Diamondbacks are looking to get out from under his contract before the full decline-phase sets in and Montero becomes a sunken cost.

It will be interesting to see if the Diamondbacks aim to get a legitimate prospect in this deal or if they’re just looking for payroll flexibility.

The makes sense for the Cubs after losing out on Russell Martin earlier this offseason.

While Montero may not match Martin’s production, he has shown consistent pop throughout his career and could be one healthy season away from turning things around offensively.

He’s also ranked as one of the better catchers in the game at framing and blocking pitches, proving he offers value beyond his offense.

The Cubs are looking for a stopgap option until 2014 first-round pick Kyle Schwarber is ready, which probably won’t be before 2016 at the earliest.

The Diamondbacks are looking to shed some salary to accommodate other moves this offseason.

This sounds like a match made in heaven San Diego.