Posted on December 9, 2014 by Jeremiah Graves 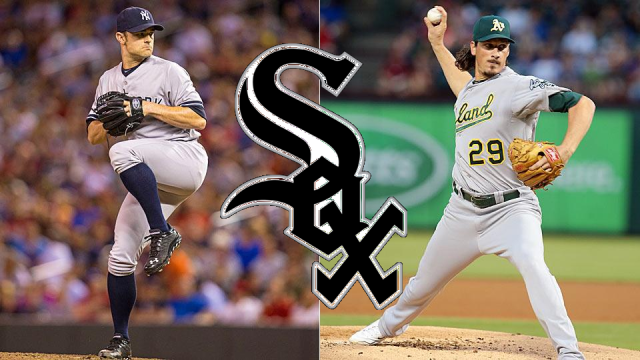 What a difference a day makes.

Coming into the Winter Meetings, the Chicago White Sox were a team coming off a dismal 72-89 season and just watched Paul Konerko, the face of the franchise for more than a decade, ride off into the sunset.

At the end of the first day of the Winter Meetings, Chicago proved beyond a shadow of a doubt that they are planning to be a contender in 2015.

The day started off with percolating rumors that the club was in discussions with the Oakland Athletics to acquire Samardzija for a package of highly-valued prospects. While that rumor simmered and both clubs worked to finalize a deal, Chicago dropped another bomb.

Robertson immediately takes over as the club’s closer and helps solidify a bullpen that was one of the worst in the game last year. White Sox relievers posted a 4.38 ERA and garnered a meager 36 saves while allowing opposing hitters to post a .740 OPS.

While it was believed the Yankees had interest in retaining Robertson to build a dominate bullpen with All-Star right-hander Dellin Betances and recently-acquired Andrew Miller, but it’s been reported that the Yankees never made Robertson an official offer beyond extending the qualifying offer at the end of the season.

If the Sox had only landed Robertson, it would have been a good day, but before the night was over the club solidified their anticipated deal with Jeff Samardzija.

The return for Samardzija is headed by infielder Marcus Semien who figures to take over at shortstop immediately for the Athletics, allowing them to move on from Jed Lowrie or – if his market fails to develop – attempt to re-sign him to play elsewhere in the infield.

Semien, 23, was rated the #91 prospect in the game prior to 2014 according to Baseball America and figures to bring a solid presence to the middle infield for Oakland. While he’s yet to do much at the big league level, Semien did post a strong .272/.374/.465 line in the minor leagues displaying 15-home run power and good speed.

The Athletics are also expected to acquire right-hander Chris Bassitt and another player, yet to be named.

Samardzija will fit perfectly between incumbent lefties Chris Sale and Jose Quintana in the White Sox rotation, giving them a top three that is arguably the best in the division and quite possibly the best in the American League.

Samardzija is expected to make somewhere between $9-$10 million via arbitration this winter and will be eligible for free agency after the 2015 season. While Chicago is planning to engage in extension talks, it’s widely-believed that Samardzija plans to test the market as a free agent.

This makes it clear that the White Sox are going all-in to make the playoffs this season.

The signings of Adam LaRoche and Robertson, coupled with the Samardzija trade have positioned the Sox as one of the favorites in the wide-open AL Central and a few more big moves could make them favorites to win the pennant as well.

Update: It looks like the Samardzija trade expanded overnight to include catcher Josh Phegley and first baseman Rangel Ravelo from the White Sox and one-time top prospect, right-handed pitcher Michael Ynoa from the Athletics switching clubs in the trade.

Cheap Plug: Be sure to check out the reaction post to these moves from current Twins fan, and converted White Sox fan, CSC’s own, Justin Kunkel.