It is no secret. When a pitcher losses velocity and relies on a fastball and pitching catalogue of his former days, he is asking for a ticket home. More often than not, these starting pitchers are put into the bullpen. Then there are those rare moments when the reinvention process catches on. In Jake Peavy’s case, he has Hall of Fame quality catcher Gerald Dempsey ‘Buster’ Posey III or as we all like to call him, ‘Posey’ or ‘Buster’, behind the plate.

When Posey was up to bat against Angels left-hander C.J. Wilson on Sunday’s game, he found himself intrigued. What Posey discovered was Wilson’s nasty four-seam changeup, which looked like a four-seem fastball off the hand[1]. It is a well-known fact amongst San Francisco Giants fans that Posey is an artful catcher and a heck of a hitter too (#MVPosey 2012). Peavy confirmed this when interviewed a day ago with Giants beat writer Chris Haft: “If you have one of the best hitters in the league as your catcher, and he acts like he’s batting when you’re facing the opponent…. He’s a special talent.”

Peavy is no rook though. A three-time All Star with two rings to brag[2], Peavy has been around the block and has seen pitchers reinvent themselves. Like those pitchers who lose velocity, Peavy took to experimenting. Oftentimes, these undertakings can range from a new pitch rotation and even sometimes, a new pitch to boot. Mechanics can be reworked. A new superstition adopted. The efforts are exhaustive and many times done with a pitching coach or a trainer.

Jake Peavy superstitious? You decide: "I'm going to get rid of my red shower shoes. It will be orange from here on out." #SFGiants

But this native of Mobile, Alabama is not your average Joe. Posey came up to his right-hander the day after facing Wilson and described what he had witnessed and simply asked, “Can you throw one of those?” to which Peavy replied “I don’t know.”

Was all Posey had to ask to trigger Peavy’s impulse of trying the new four-seam changeup on Monday’s Royals-Giants exhibition game; does the match-up sound familiar Giants fans? The result? Striking out Kansas City Royals outfielder Lorenzo Cain to end the fifth, stranding a potential run at second base.[3] 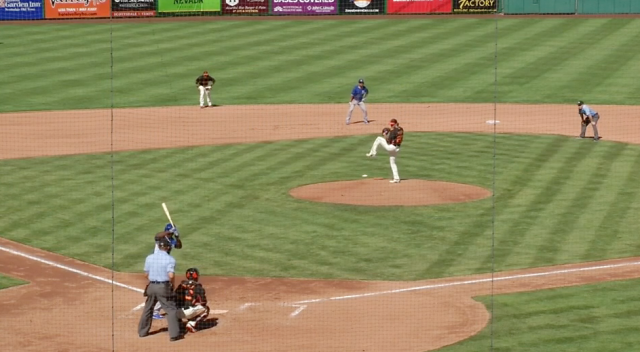 
Peavy later told his catcher. “The changeup, I think we found something there.”1