The Oregon Ducks Looking for a Crystal Beak

Posted on January 8, 2015 by stevenkunkel 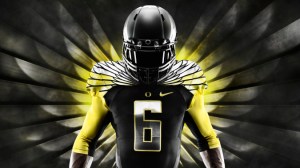 The Oregon Ducks, led by Mark Helfrich, are the epitome of new age college football.

In fact, they’re absolutely flamboyant about it – whether it is their vast array of jerseys or their controlled-chaos brand of football – the Oregon Ducks do everything with a style only they appear to be able to perfect.

Utilizing an offensive spread option established by Helfrich’s predecessor Chip Kelly and expanded upon by Helfrich himself, the Oregon Ducks may be the fastest team on the planet. Case in point, they managed to run an offensive snap every 20 seconds in their first college playoff game vs. Florida State. They do things with an efficiency no other team has been able to replicate with the same type of precision – and there are a lot of schools attempting to copycat the Oregon Ducks.

You see, this is the Ducks’ second National Championship appearance in five years, their previous appearance occurring in 2011 where they narrowly lost to the Auburn Tigers, and ever since that 2010 season when Oregon first put the duck wings on their uniforms, they have been flying well above the rest of college football in recruiting and on-field success.

In fact, this has been their ranking at the end of each season since 2010:

That’s an absurd 58-6 over the last five seasons and the type of team the Ohio State Buckeyes need to be prepared for next Monday.

While the success of the Oregon Ducks feels like a recent development in comparison to the history of their National Championship counterpart, what can’t be ignored is their 59-20 drubbing of last year’s National Champions in the Rose Bowl and the fact that this team has certainly been there before with four BCS bowl games in the last five years. No longer will they be blinded by the bright lights of the big stage and you can bet the Ducks are hungry to put one final stamp on what they’ve been building since 2007.

While similar articles have probably been written about every single Heisman quarterback ever, what can’t be ignored is that Mariota has gone 37-2 as a starter. He leads the nation in quarterback rating, passing efficiency, coolest name, and he has soared above any Pac 12 player in conference history by accounting for 12,661 total yards and 134 career touchdowns.

Mariota personifies the great quarterback and what we as fans of this game keep learning about football over the last decade is that the team with the best quarterback often wins the battle. Period.

You never know, a year from now, when Mariota enters the NFL, we may be calling him a system quarterback, but he’s mastered that system and that makes these Ducks a completely dangerous team for the Buckeyes.