Posted on January 7, 2015 by Jeremiah Graves 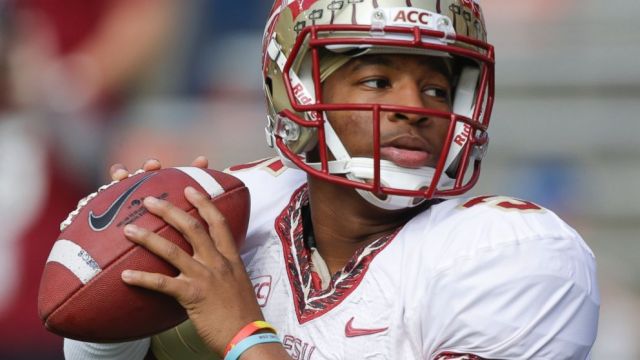 That’s the news coming from Winston’s father via ESPN:

Initially, Antonor Winston said his son planned to wait until after the College Football Playoff National Championship Presented by AT&T to announce a decision, but instead, Jameis Winston came to a firm decision Tuesday night that he was ready to enter the NFL draft.

Winston is projected by most as the second-best quarterback available behind 2014 Heisman Trophy winner Marcus Mariota.

ESPN’s Mel Kiper Jr. rated Winston as the sixth player overall on his latest Big Board.

The Tampa Bay Buccaneers have the first pick and could use a franchise quarterback, so it’s likely Winston won’t be leaving the Sunshine State anytime soon.

In addition to video-game statistics and piles of wins, Winston’s time at Florida State was also filled with a number of off-field incidents which could bring his maturity into question for some teams.

Given his special skill-set it’s likely talent will trump personality and Winston will be off the board very quickly in April.

Winston’s father said the original plans to delay the decision were changed due to intense media coverage.

A formal announcement from Winston is expected Wednesday afternoon.

I am a professional library dude, a cheeseburger enthusiast, a wannabe writer, a slow-pitch softball center fielder, an avid hunter (of churros), a cat-person, and — hopefully — one of your two or three favorite Iowans.
View all posts by Jeremiah Graves →
This entry was posted in College Football, Florida State, Football, Jameis Winston, NCAA, NFL. Bookmark the permalink.