The Kansas City Royals are Your 2014 World Series Champions!! 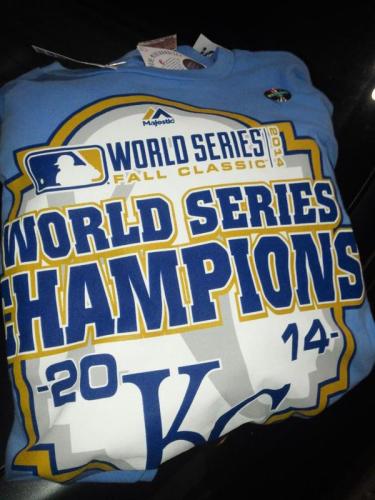 Okay, so they’re not really the World Series champions.

That one teeny-tiny fact didn’t stop a department store in Joplin, Missouri, from selling a whole bunch of t-shirts last weekend that proclaimed the Royals were, in fact, the “2014 World Series Champions.”

While we all know that these shirts get printed for every major sporting championship, they generally disappear into the ether (or Africa or South America) never to be seen again.

This time around, a handful of the losing team’s shirts landed in a Ross department store where they sold for a very reasonable $8.99 per shirt.

So while Madison Bumgarner remained invincible and the San Francisco Giants hoisted a third World Series banner in the last five years, I think we can all imagine an alternate universe where things turn out differently for the Royals.

In that alternate universe, Alex Gordon kept running around third base and Brandon Crawford sailed the throw over Buster Posey’s head into the backstop, allowing Gordon to score and tie the game.

Giants manager Bruce Bochy – realizing that he’d gotten all he could from Bumgarner – gave the lefty the hook and went to closer Santiago Casilla to hold the tie.

Salvador Perez, still hurting from getting drilled in the left leg in the second inning, stepped into the box.

Coming into the game, Perez was 0 for 1 lifetime with a strikeout against Casilla, but on that October night he took a 2-1 slider, low and away and pulled it deep into the left field bleacher for a walk-off, World Series winning home run.

…and scene. Roll the credits.

While that makes for a better narrative – if you’re not a Giants fan – it’s also nothing but fiction.

As such, anyone who snagged one of these shirts will have to deal with the fact that it’s wildly incorrectly, but at least they can consider it one heck of a collector’s item.

After all, how many people can say that they have a shirt from an alternate universe?