Posted on December 7, 2014 by stevenkunkel 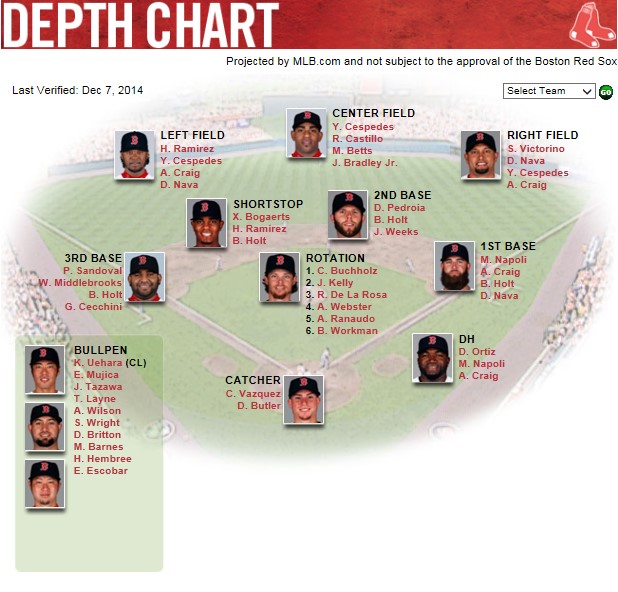 It must be nice to be rich and the Boston Red Sox, this offseason, are rich in talent.

They are so rich in talent that it makes this Twins fan bury my head in shame over our “number 1 and number 2” rated minor league prospects that we as fans continue to wait on as injuries take over Miguel Sano and Byron Buxton’s careers.

The recent signings of Hanley Ramirez and Pablo Sandoval to, what appear to be, club friendly deals, even at an AAV (Average Annual Value) of $22M & $19M respectively, have opened up scores of room for the Red Sox GM to work with his roster this Winter and I would fully expect he is going to be active in the trade market.

With so many options available and the Winter Meetings starting today, December 7, 2014, lets take a quick look at the decisions Cherington should be making this Winter.

Personally, I don’t believe any of the stories I’ve read this Winter that Cespedes isn’t a good locker room member or that he doesn’t have the motivation to be great. Cespedes had never ended up in the media for anything negative until he reached the Boston market where there needs to be an “excuse” for everything – lets talk about chicken and beer again why don’t we?

No, I think the Red Sox need to get rid of Yoenis immediately because he’s going to bring in the type of pitcher that they’re missing. He’s reasonably priced, $10.5M in 2015, and if traded to the right team, they should be able to sign him long-term.

Yoenis has been an All-Star, but mainly because of his prodigious power and how many people he can put in the seats at the homerun derby than for the types of first half seasons he has put up. Thus, he should be able to be owned for less than $20M annually. Also, based on his signing with the Athletics coming out of Cuba in 2012, my bet is he doesn’t hold the same type of geographical biases American players have when they hit free agency where LA, San Francisco, Chicago, Boston, New York, & Texas are the main draw.

I think Yoenis just enjoys playing the game and will do it wherever he is wanted and can play.

Listen, Mr. Cherington, you might be a businessman, but I’m a fantasy baseball playing baseball fan. So, please, please, please don’t waste Allen Craig for the rest of America by sitting him on your bench or playing him twice a week. You have a responsibility to baseball fans everywhere to get your 1B situation cleared up as soon as possible. We don’t care if that means you get rid of Napoli or Craig to a 1B or DH starved team. Here are some examples: Rangers, Mariners, Nationals, Pirates, Marlins, Brewers, & Padres. Both of these guys hold value and neither should be involved in a 3-way platoon with Ortiz when they can still help a team. I sincerely hope the list of available trade partners above helps make your job easier, because it sure would be a shame to watch someone as talented as Craig sitting on the bench.

You might be sick of watching 24-year-old Jackie Bradley Jr. flounder at the plate, but I can guarantee you some other team out there isn’t. This is still a very talented individual who plays above average defense and isn’t getting the at bats needed to fix the mental side of things he’s struggling with. The future doesn’t look very bright to fix this complete lapse in at bats either.

Here are a few players that a change of scenery have completely changed their career trajectories – Carlos Gomez, Chris Davis, Jake Arrieta, and many, many more.

With seven starting outfielders on your roster – Hanley Ramirez, Yoenis Cespedes, Shane Victorino, Rusney Castillo, Mookie Betts, Jackie Bradley Jr., and Daniel Nava – you can afford to let this one shine by sending him to another market.

Boston fans have a history of overvaluing and coveting their young talent. Sometimes they’re right and sometimes they’re wrong. Yes, I’ll admit trading Buchholz and Ellsbury for Johan Santana would have probably been a bad idea. However, in Boston, Bradley Jr. is no longer a man that can find time on this roster and I hope they’ll release him from this floundering plight.

These are just three things that Red Sox GM Ben Cherington should be deciding as this Winter progresses and most of them are problems of abundance. These 2015 Red Sox are so rich in talent they can afford to get rid of valuable players like Craig or future stars like Bradley Jr. because they simply don’t have a place for them on their roster. That is a good place to be.

No, I don’t have scenarios laid out for what the Red Sox will be getting in return, but if Cherington listens to my advice and does the above, the Red Sox roster would still look like this if they received no one in return:

This, my baseball loving friends, is not a problem. So, please, Mr. Cherington, release back into the rest of the world Cespedes, Craig, & Bradley Jr.

You have proven to all of us just how richly abundant your team can be! Now show mercy!