Minnesota Twins: Six Things Fans Will Miss About the Metrodome 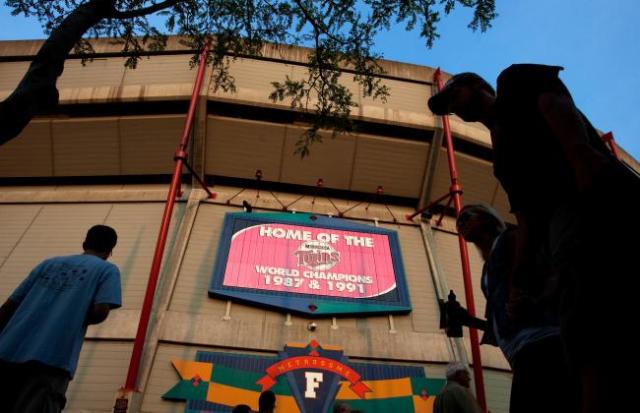 After 28 long seasons spent cooped up inside a big Teflon bubble the Minnesota Twins will be moving to an exquisite new ballpark for the 2010 season.

Target Field figures to provide the Twins with not only a much better playing environment, but also much larger revenue streams.

The club has already made the most of the revenue increase by bumping the payroll nearly $40 million over last year’s Opening Day payroll. The on-field results, however, are a wait in progress.

The move will obviously have a large impact on the ballclub, but also on the fans that have trekked to the Metrodome for the better part of three decades.

With that in mind, here are six things that fans won’t miss about the Metrodome.

The Twins have long been known for having some of the lowest ticket prices in all of baseball. Undoubtedly the move to Target Field will result in an uptick in overall ticket prices.

The Metrodome may have been—for the most part—an awful venue for a baseball game, but that was also the reason ticket prices were so low.

Granted, a slew of awful teams through the majority of the ‘90s also kept the club from raising prices, but no matter the rationale, the prices were affordable.

The days of $5 tickets and the 81 games for $81 season ticket package may be gone, but Target Field—and the product on the field—should be worth the extra coin.

It’s been called many things over the better part of three decades.

Some call it “the tenth man” and some refer to it as the “dome-field advantage.” No matter what you call it, it was technically just noise.

However, it was enough noise to earn the “Thunderdome” moniker during Minnesota’s World Series runs in 1987 and 1991 when decibel levels peaked at 125 and 118, respectively, comparable to a jet airliner and close to the threshold of pain.

The Metrodome has consistently been one of the noisiest sports arenas in the country and this has served a major advantage for the Twins throughout the years as opposing players have trouble communicating with one another and can be completely overwhelmed by the noise.

I’ve already blogged about the demise of the Dome Dog once this offseason, but this feels like the right time to say my final words.

The quarter-pound hot dog was a mainstay in my Metrodome experiences from my first trip to the stadium until my last. To this day, I still rank it the best hot dog I’ve had at any ballpark.

I realize that the Twins have lined up some
exciting new options with local hot dog producer, Schweigert and I’m sure they’ll be great.

There’s just some iconic about going to a Twins game and getting a Dome Dog.

I know I’m not alone on this one; the Dome Dog will definitely be missed. 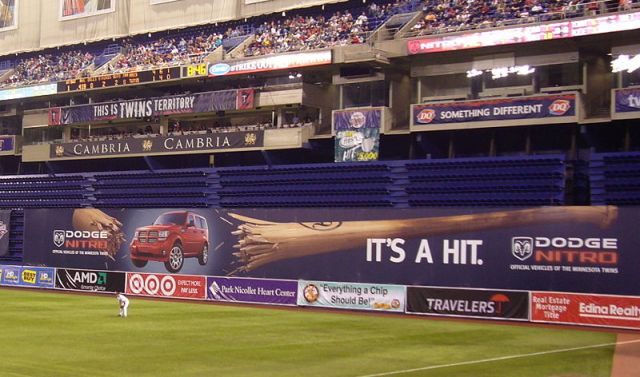 Fenway may have “the Green Monster,” but Minnesota fans have had “the Hefty Bag” or simply “the Baggie” for 28 great seasons.

Much like it’s counterpart in Boston, “the Baggie” was constructed more out of necessity than to serve a quaint quirk of the ballpark.

The 23 foot wall was put up to hide all of the folded up seats used to expand seating capacity for football games.

Many an opposing player has misplayed balls off of the “the Baggie” resulting in big plays for Minnesota.

In recent years Twins fans have been lucky enough to watch Michael Cuddyer “play the wall” to perfection, often gunning down runners attempting to stretch an extra base hit. 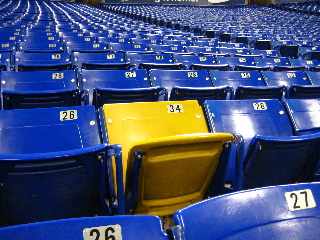 Kirby Puckett is arguably the most prominent figure in club history.

As such, his 11th inning, walk-off home run in game six of the 1991 World Series is undoubtedly one of the biggest moments in club history.

As a result, the club commemorated Puckett’s blast by installing a golden seat—adorned with his jersey number, 34—amidst the blue seats in left-center field.

Back in the days of general admission seats, I watched many-a-fight for the rights to spend a game in the golden seat.

It’ll be sad to leave behind such a large part of Kirby’s legacy, but it also opens the door for a new era of Twins heroes to create their own iconic memories. 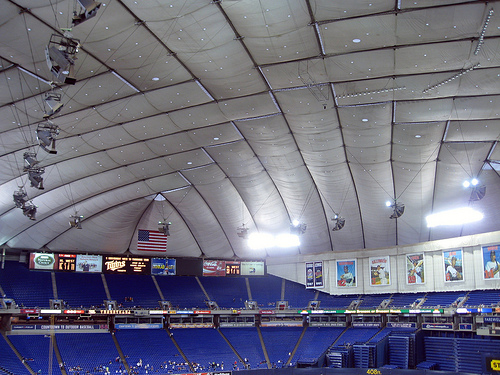 In 28 seasons, the Twins have only had one postponement. That came way back in April of 1983 when the roof deflated due to a tear caused by heavy snow.

Needless to say, that level of consistency will be lost at Target Field. Two years ago I attended Opening Day at the Metrodome in a blizzard. Inside the dome it was a balmy 72 degrees.

Fans from all over Twins Territory will miss knowing that the game will be played no matter the weather.

Additionally, the games that don’t get cancelled in early April and October figure to be cold enough to cause Twins fans to long—albeit briefly—for the comforts of the Metrodome.

I am a professional library dude, a cheeseburger enthusiast, a wannabe writer, a slow-pitch softball center fielder, an avid hunter (of churros), a cat-person, and -- hopefully -- one of your two or three favorite Iowans.
View all posts by Jeremiah Graves →
This entry was posted in AL Central, American League, Baseball, Cheap Seat Chronicles, Kirby Puckett, Metrodome, Minnesota Twins, MLB. Bookmark the permalink.