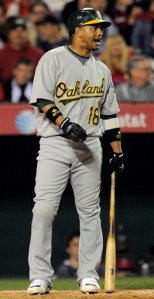 The Minnesota Twins’ search for an experienced middle infielder came to an end Friday.

Just hours before the MLB Trade Deadline, the Twins bolstered their lineup for a playoff push by acquiring 34-year-old shortstop Orlando Cabrera from the Oakland Athletics.

This is the first Trade Deadline acquisition by the Twins since 2003, when the club traded for Shannon Stewart, a move that propelled the Twins into the playoffs.

Adding Cabrera gives Minnesota an aging, yet reliable glove at short and an upgrade at the plate over Nick Punto and Alexi Casilla.

Additionally, he provides a veteran presence with plenty of playoff experience, something very few members of the Twins current roster possess.

Cabrera figures to hit in the two-hole and take over at shortstop with Brendan Harris moving to second base.

Cabrera has roughly $1.75 million remaining on his contract. The Athletics have reportedly sent cash in the deal to offset part of his salary.

One downfall of this deal is that despite the fact that Cabrera currently profiles as a Type A free agent, the Twins will be unable to offer him arbitration after the season in hopes of gaining draft picks if Cabrera signs elsewhere for the 2010 season.

After struggling to find a taker last offseason, Cabrera and his agent negotiated a clause into his contract with the Athletics disallowing whichever club he finished the season with to offer him arbitration.

Ladendorf, a second-round pick of the Twins in the 2008 First-Year Player Draft, gives the A’s a productive, young, cheap shortstop who could be major league ready in two or three years. This season in Class-A he’s hitting .322 with four homers, 21 RBI and three stolen bases.

I am a professional library dude, a cheeseburger enthusiast, a wannabe writer, a slow-pitch softball center fielder, an avid hunter (of churros), a cat-person, and -- hopefully -- one of your two or three favorite Iowans.
View all posts by Jeremiah Graves →
This entry was posted in AL Central, American League, Baseball, Cheap Seat Chronicles, Minnesota Twins, MLB, Oakland Athletics, Orlando Cabrera, Trade Deadline. Bookmark the permalink.