Game On: Yoan Moncada is a Free Agent

Posted on February 3, 2015 by Jeremiah Graves

Yoan Moncada has been waiting for quite some time, but – as of today – he is officially a free agent.

The star prospect is now free to sign with any Major League Baseball team and make lots and lots of cash in the process.

Until very recently, the process was taking months of back-and-forth between the Department of the Treasury’s Office of Foreign Assets Control (OFAC) and Major League Baseball as the process for allowing Cuban players to sign with MLB teams has long been convoluted and time-consuming.

Recent changes in the government’s policy regarding Cuba, however, prompted MLB to overhaul the process and allow for Cuban players to sign with major league teams much more quickly and with fewer hassles.

The new process requires Cuban players to present a sworn affidavit to Major League Baseball proving that they are residents of another country, have no intention of returning to Cuba, and are not Cuban government officials.

Once that has been done, the player is free to sign with major league teams immediately.

The new process means that – in addition to Moncada – fellow Cuban infielders, Hector Olivera and Andy Ibanez should be on the fast-track to free agency as well.

Moncada, 19, however, is the cream of the crop and is widely-regarded as the top international prospect available.

The infielder is a switch-hitter who possesses excellent bat speed and raw power that is still developing. It could develop quickly as he continues to fill-out, he was listed at 6 feet and 210 pounds while playing in Cuba. 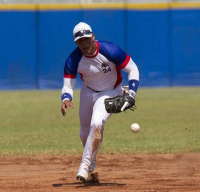 In addition to his promising bat, he’s got top-notch wheels and offers defensive versatility. The youngster has experience at shortstop, second base, third base, and – sporadically – in center field.

Due to his size and the demands at shortstop, it’s believed he’ll ultimately wind up at second base – his primary position for Cienfuegos during his stint in Serie Nacional – or at third base when he reaches the big leagues.

There is some speculation that a club could try to maximize his speed and arm strength by utilizing him in the outfield, but given his incredible upside as an infielder, it’s unlikely a club would sign Moncada and not give him a chance to win an infield job before moving him to the outfield.

Moncada held a showcase for a number of teams in November and has held private work outs with a number of clubs including the Rays, Dodgers, Brewers, Rangers, Giants, Yankees, Red Sox, and Padres.

It’s also believed the Cubs are very interested, but wouldn’t be able to sign him until after June 15, due to international signing restrictions from spending big in previous years.

Despite rampant interest, it’s likely that only the clubs with the deepest pockets have a chance at landing Moncada as he is pegged to sign for $30-40 million.

If that seems like a lot of money, it’s worth noting that this figure doesn’t include the penalty the team will pay for exceeding their bonus pool amounts. Moncada is subject to the international bonus pools as he’s considered an amateur.

The penalty for exceeding those allotted pools figures to result in a 100% tax on every dollar spent, making the final cost to the winner something closer to the $60-80 million range.

In addition to the monetary cost, whichever club signs Moncada will also lose the ability to sign any pool-eligible player for more than $300,000 during the next two signing periods. This is the same restriction currently placed on the Cubs.

The Dodgers, Yankees, and Red Sox are heavily-speculated to be the front-runners, but Moncada is considered a big enough talent for plenty of dark horses to sneak into the mix and spend big.

1 Response to Game On: Yoan Moncada is a Free Agent