Karma’s Out to Get You, Kris Bryant 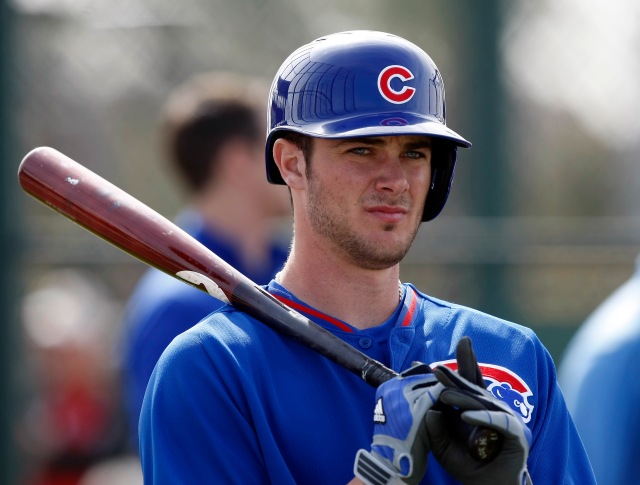 Congratulations on becoming the top-ranked player in Minor League Baseball! I’m sure this is a very exciting time for you as you try to prove to your Major League affiliate that you are the perfect for for their long-term plans!

Over the course of your minor league career you have shown major growth, development, and SO MUCH POWER, proving that you are worthy of this #1 ranking, and what should be an everyday job in the Majors right out of Spring Training. Heck, with all the young talent in Chicago – coupled with the moves that Theo Epstein and Jed Hoyer made this winter – your skills could translate to a playoff appearance for the Cubbies if everything falls into place.

Pushing Chicago back into the playoffs – and potentially the World Series – would surely land a Rookie of the Year award on your mantle. We know this is obviously a part of your larger goals and we hope you obtain all the success in the world, but we have a warning for you, Mr. #1 Prospect in Baseball:

This warning does not come lightly or without just cause.

You see, Mr. Bryant. There is some type of karma that has it out for the guy who is handed the title of the best prospect in baseball. Something doesn’t want to see them succeed; and whatever it is that is bringing the hammer down on these prospects, frankly, scares the hell out of me.

Let’s take a look at Byron Buxton, center fielder for the Minnesota Twins organization, and last year’s consensus #1 prospect in the game, according to Baseball America, Baseball Prospectus, ESPN.com and MLB.com. Buxton is a solid five-tool player who manufactured a blistering .944 OPS in 2013, he was well on his way to making an impact for a very bad Twins team which has posted 90-loss seasons in four consecutive years.

Buxton was supposed to be the savior for the franchise. You don’t often come across a player who is a legitimate plus prospect in all five tools: hitting, fielding, running, throwing, and power. He and Miguel Sano were going to make an impact and reignite a once legitimate powerhouse in the American League Central.

…and then the injuries came.  And they didn’t stop.

Throughout the entirety of 2014 Buxton just couldn’t seem to stay healthy. As a result, he naturally produced less-than-stellar numbers, and certainly nowhere near “best prospect in baseball” territory. On the whole he put up a triple slash of .234/.307/.395 in only 30 games of High-A ball, and one partial game at Double-A.

It started out with a spring training wrist injury that cost him three months. After finally returning to the field he was eventually promoted to Double-A, where in his first game there he collided with teammate Mike Kvasnicka, making the hearts of each and every Twins fan skip a beat while watching him get carted off the field in an ambulance. Check out the nasty collision below:

Despite this initial shock and panic, this collision only resulted in a concussion, albeit one that ended Buxton’s already disappointing season in August.

Buxton was eventually cleared to participate in the Arizona Fall League in the hopes of recouping some of the lost playing time, but instead of re-establishing himself, he dislocated the middle finger on his left hand while diving for a ball in the outfield.

Needless to say, Buxton’s stock has fallen quite a bit and rather than hype and big expectations; Buxton, and Twins fans alike, are simply hoping for a healthy year in 2015.

If the proof of the baseball Gods striking down Byron Buxton isn’t enough, Mr. Bryant, then look no further than Buxton’s predecessor as the number one prospect in baseball, Jurickson Profar.

Profar had already shown the Texas Rangers that he was their guy, hitting a home run in his first major league at bat.

He was added to their playoff roster in the 2012 postseason proving how professional he was as a 19-year-old playing on baseball’s biggest stage.

Profar was believed to be the “next big thing” before the 2013 season, he was ranked as the consensus #1 prospect in baseball by Baseball America, Baseball Prospectus, and the MLB.com. He started out that season at Triple-A Round Rock and demolished minor league pitching to the tune of seven doubles, two triples, four homers, and six stolen bases in only 37 games.

Profar finally got his chance to prove what he could do in an extended look with the Rangers when second baseman Ian Kinsler was put on the disabled list on May 19, with a strained rib muscle. Without a full-time position to play after Kinsler returned, Profar was moved all over the diamond over the final part of the 2013 season. At 20-years-old, he showed flashes of promise during an otherwise unsuccessful campaign, hitting .234/.308/.336.

Despite not tearing the cover off the ball in his brief big league stint, he’d shown enough for the Rangers organization to deal Kinsler, to the Detroit Tigers for slugging first baseman, Prince Fielder. Profar was slated to be the Rangers everyday second baseman coming into the 2014 season.

…and then the injuries came.  And they didn’t stop

Profar first felt pain in his shoulder during Spring Training of 2014. Later an MRI revealed there was a tear, but the only way to get better was with rest and relaxation. Texas shut him down for three months, being very conservative with Profar’s rehab. Unfortunately, shortly after beginning a throwing program in May, he aggravated the shoulder while rolling over in bed, requiring more rest and still no options for surgery. This marked the end of his season.

When Profar tried again for another throwing program in September the shoulder flared up for a third time. The Rangers decided to rest him for another three months, hoping he will be ready for Spring Training 2015. Recent MRIs have shown positive results, and he may have finally put this all behind him. Time will tell, but needless to say, it was a very long year for Mr. Profar.

Then there is the wunderkind, Bryce Harper.

You may remember him as that kid who showed up on the cover of Sports Illustrated when he was just 16-years-old.  He graduated high school early so that he could attend one of the best junior college baseball programs in the nation, College of Southern Nevada, and make himself eligible for the draft as early as humanly possible.

Bryce Harper always had talent, aggression, charisma, and a certain flair for the game. All of that was on full-display during his season with CSN and it only further elevated his already soaring draft stock. He was drafted by the Nationals first overall in 2010, and showed so much promise after his first year of professional baseball that he became the number one prospect in 2011. He was bestowed with that title again in 2012.

Harper was called up to the Nationals in April of 2012 at a mere 19-years-and-195-days-old. He served as a spark-plug and helped propel the team to 98 wins and their first division title since the franchise moved to Washington. Although the Nationals were eliminated in the National League Division Series against the St. Louis Cardinals, Harper ultimately went on to win the NL Rookie of the Year, proving just how right everybody was about him.

As you can see, Harper sustained great success during his rookie season, and looked on pace to be one of best the game has ever seen.

…and then the injuries came.  And they didn’t stop.

As a result, Harper was sapped of his power and was forced to tone down his aggressive, all-out playing style.

The injury that started it all was when Harper took on a wall – twice in a one month period – and the wall won both times. The wall shot that did the most damage was in May of 2013. Harper was tracking a deep fly ball hit by the Dodgers’ A.J. Ellis. He lost track of where he was on the field and crashed into the wall at full-speed. He suffered a jammed left shoulder and a cut under his chin that required eleven stitches.

This same collision with said wall was also blamed for knee issues that Harper fought on-and-off throughout the rest of the season, curtailing his power in the second half of the season. The knee eventually required Bursa Sac surgery in October of the same year.

It was expected that 2014 would finally provide Harper a clean, injury-free slate to continue his building the early stages of his “legacy.” Unfortunately, it was more of the same and 2014 wasn’t any kinder to the young outfielder.

Harper was benched in late April by new manager, Matt Williams for a perceived “lack of hustle,” despite nursing a tight quad. Less than ten days later, he suffered a left thumb injury sliding into third base in an attempt to leg out a bases clearing triple. An MRI later revealed that he had a torn ulnar collateral ligament that would require surgery on the thumb. Harper finally returned to have a rough month of July before righting the ship and hitting .279 with seven home runs in August.

Clearly, there is room for redemption and happy endings, but recent history has not been kind to top prospects.

Kris, if I were you, I would stay away from mirrors, ladders, and I would never, EVER, step on the foul line. It doesn’t help that you already play for the “cursed” Cubs franchise.

You have been the epitome of an amazing MiLB player, and I want to see these skills translate into the Major Leagues. Your 2014 Minor League season was one for the ages; hitting 43 dingers is not easy at any level, and I hope you will have a long, successful, and injury-free MLB career. It is time to break the injury streak and provide the Cubs organization a homegrown super star that they desperately need on their road to becoming relevant again.

All the best,
Justin Kunkel