Full-Disclosure: I didn’t start watching the NFC Championship Game until there were roughly five minutes left.

I turned the game on just as Russell Wilson was throwing his fourth pick of the day and everyone was patting Green Bay on the back for returning to the Super Bowl.

As such, my rundown of the NFC Championship Game really only covers what I saw, which is fine, because it was absolutely amazing.

After the interception, Green Bay put up a rather pathetic three and out that saw the Seahawks defense turn into a steel curtain at precisely the right time.

Upon getting the ball back on the 31 yard line following a mediocre punt, Russell Wilson decided it was time to wake up and go to the team’s biggest weapon, Marshawn Lynch. He hit Lynch with a huge pass up the sideline that was initially ruled a touchdown with roughly 2:30 left, but was called back to the nine yard line.

The Seattle offense punched their way up to the goal line and Russell Wilson poked his way into the end zone.

Seattle popped the PAT to make it 19-14 with just over two minutes remaining.

It was time for an on-sides kick. Green Bay knew it. You knew. The guy serving nachos knew it.

I’m not sure Brandon Bostick knew it.

Here’s a close-up in case you couldn’t quite see the ball *BONK* off his facemask and through his fingers.

Seattle took advantage and roared back down the field.

Once again, they made the right move and gave the ball to Beast Mode who took it 24 yards to the house for the lead with just under a minute and a half left in regulation.

Lynch – realizing how quickly his squad had come back – refused to celebrate like they’d won the game and went for a more subdued touchdown celebration.

What followed was one of the sloppiest plays I’ve ever seen and some of the laziest defense you can imagine given the situation.

Seattle was now emboldened with a three point lead and time rapidly running out for Green Bay.

The Packers got the ball back on the ensuing kick-off and began marching down the field, now trailing 22-19.

On the sidelines, Mason Crosby did battle with a kicking net while preparing for arguably the biggest kick of his career.

…you’d think Green Bay would employ someone to prevent situations like this, but alas, Crosby soldiered on.

Aaron Rodgers spread the ball around hitting his receivers and picking up yards in bunches before gutting it out on his bum leg and taking off for a huge first down.

Despite their best efforts, they couldn’t pick up another first down.

Crosby came out to kick a 48-yard field goal with less than 20 seconds remaining in the game and the wind and rain working against him.

…that is what you call clutch.

Seattle got the ball back on a low kick but chose to take a knee on first down and let time expire.

In overtime Seattle got the ball and proceeded to march down the field play after play, eventually setting up this 35-yard strike to Jermaine Kearse to send the Seahawks back to the Super Bowl for the second-straight year.

…so there you have it.

The AFC Championship Game has a lot of work to do if it’s going to match this one in intensity, excitement, or sheer Vine-ability.

My advice, always wait until the last five minutes to watch a game, all the good stuff happens then.

…unless you’re a Packers fan. 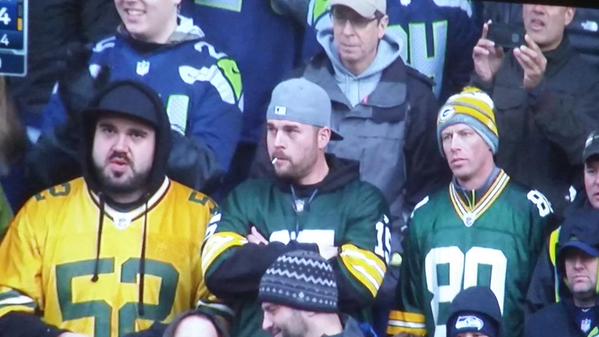