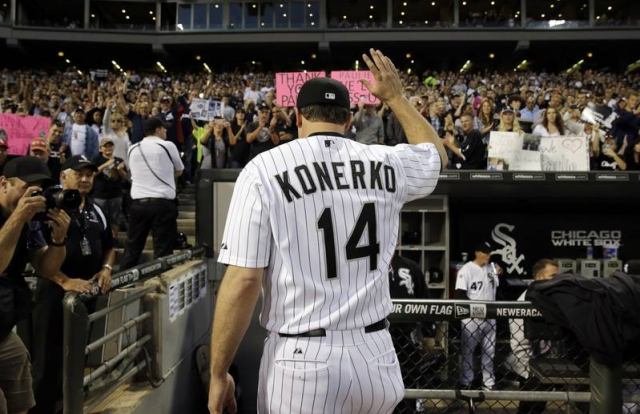 In a very classy gesture, the Chicago White Sox will retire Paul Konerko’s number 14 in a ceremony this May.

Konerko spent 16 seasons with Chicago and famously helped lead the Sox to a World Series championship in 2005, the franchise’s first title since 1917.

He was named team captain after signing a five-year, $60 million deal to return to the team in the wake of the title victory and held that distinction until he retired at the end of the 2014 season.

He is one of the most-beloved starts in franchise history and it’s great to see the club honoring him so quickly after his retirement.

“Paul Konerko is one of the greatest players in White Sox history not only for his strength and performance on the field, but also for his heart and leadership off the field.”

“Paul was a humble leader whose passion for the game earned the respect and love of the entire clubhouse and fans all over the country. We honor Paul by retiring his number and welcoming him to the ranks of White Sox legends.”

I think it’s great to see Chicago honoring Konkero and his accomplishments right away.

It was a shame that Konkero didn’t receive nearly the same outpouring of #re2pect and adulation from the media that Derek Jeter did during his retirement tour. Konerko may not mean as much on the national stage, but he is just as important to the White Sox as Jeter was to the Yankees.

While Konerko is highly-regarded among alongside his White Sox contemporaries he was no slouch in the greater baseball world either.

It’s a very cool gesture for a very deserving player who meant so much to the organization over the last two decades.

I am a professional library dude, a cheeseburger enthusiast, a wannabe writer, a slow-pitch softball center fielder, an avid hunter (of churros), a cat-person, and — hopefully — one of your two or three favorite Iowans.
View all posts by Jeremiah Graves →
This entry was posted in AL Central, American League, Baseball, Cheap Seat Chronicles, Chicago White Sox, MLB, Paul Konerko. Bookmark the permalink.