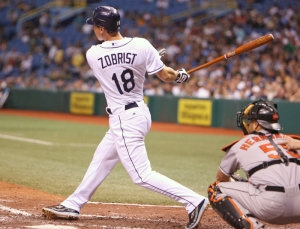 Of all of the places I thought Ben Zobrist would land, Oakland is not where I imagined he would end up.

Athletics’ GM, Billy Beane, has been in the midst of a fire sale this offseason trading away or letting walk almost every valuable veteran that was on his roster from Jeff Samardzija, Derek Norris, Josh Donaldson, Jon Lester, Jed Lowrie, etc. Needless to say, most viewers of the baseball landscape figured the Athletics were in rebuilding mode. 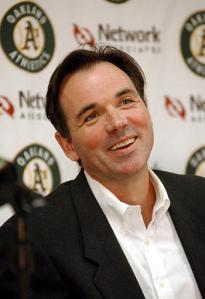 However, today’s move by Billy Beane, trading his top prospect SS Daniel Robertson and John Jaso for Ben Zobrist and Yunel Escobar does not feel like a rebuilding type of move. It feels like a reshuffling type of move and the Athletics sure look like they’re ready to compete again by filling the two largest holes in their offense by replacing Sogard with Zobrist at second and Semien with Escobar at shortstop.

With Ike Davis, Billy Butler, and Brett Lawrie on the corners and now Yunel Escobar and Ben Zobrist up the middle, the Athletics have a more potent offense now than they did at any point last year; even with Josh Donaldson manning third base all of 2014.

What may be getting under reported with all of these moves is the Athletics now have a slew of young, hot name, pitchers to go with this revamped offense. Sonny Gray and Scott Kazmir continue to headline their staff, but now they’ll slot Drew Pomeranz, Jesse Chavez, and Jesse Hahn, who they received in the Derek Norris trade with the Padres, full time into their rotation to make up for the departures of Samardzija and Lester. With Beane, it’s just the type of move that could work and work for a long time. Lets also not forget Kendall Graveman and Sean Nolin who the Athletics received in that Donaldson trade are expected to make some impact in 2015 as well.

In addition, this trade also helps the Rays. After acquiring Asdrubal Cabrera this offseason, the Rays had too many middle infield options between Escobar, Zobrist, and Cabrera, along with the heir apparent Nick Franklin waiting in the wings down in AAA. The Rays got Franklin in the David Price trade in 2014 and he likely deserved to be on the roster from day one. However, with Escobar and Zobrist entrenched, there was simply no opening to be had.

By trading the Rays’ most valuable trade chip, Ben Zobrist, the Rays have now given room for Nick Franklin to shine. They have also received ample compensation in the form of Athletics 20-year-old top prospect Daniel Robertson who had an .873 OPS in 132 games in High-A ball last year and improve upon their current catcher combination by attaining former and now current Ray, John Jaso.

Overall, it looks like a win-win for both clubs. Something you can’t always say.

This entry was posted in Cheap Seat Chronicles. Bookmark the permalink.