Posted on January 6, 2015 by BeantownGiant

Nicknames are irresistible: The Sultan of Swat, The Say-Hey Kid, Pat the Bat, Billy Country Breakfast Butler… They are found in many forms, from a short moniker (Babe, Rocket) to features of a player (Red), word play (John I Am Not A Kruk), and rhyme (Slim Jim)[2] while others are in the form of truncated names (J-Up, CarGo). These are but a scant selection of past and present nicknames. Baseball writers have covered the area of nicknames quite well too, but this is not about the greatest nicknames. No, this concerns a chief complaint filed against modern nicknames and so I turn to you, the reader, for your opinion on the matter. Critics maintain that these nicknames lack the imagination that once permeated the good ol’ days of the radio- and print-era ballplayer. Apparently modern baseball succumbed to lazy puns, shortened surnames and commonplace commercialism that do not convey information about the player. Beware of the Big Macs and A-Rods of the world. As tempting as this argument may be to some, it does not take into consideration the function and usage of nicknames. They are used in baseball to connect player and fan and functions in the clubhouse to identify a player’s status within the team.

So, what does a nickname do for an athlete and more importantly, who decides what it is? Are these nicknames as significant in modern times as they were in the past. As a softball player, I knew the moment my teammates nicknamed me Countess that I was an important part of the team. When I recently asked a teammate why I was given the nickname, he said that for starters my name is too damn long and too easy for short monikers such as Ali, Adri or the awful monosyllable, A. (For all those out there that understand how boring that would have been, thank you.) Alas, my marvelous teammate felt I deserved a regal moniker that held meaning and so the nickname Countess was born.

Let’s be honest, the same applies to professional baseball players.

Former San Francisco Giants third baseman Pablo Sandoval is a prime example of a player receiving a nickname from a teammate and the media embracing it. When brought up to the bigs in 2008, the happy-go-lucky Sandoval would leap into the air, blow an immaculate pink bubble, and tag the incoming base runner with an uncanny finesse—something not expected of a person of his gait.

This was the same year that Sandoval received the nickname “Kung Fu Panda” from teammate Barry Zito after watching Sandoval nimbly juke past the tag of catcher Danny Ardoin to score a run against the Dodgers from second base on a single hit by Bengie Molina. Since then Sandoval has embraced this name based on a cartoon about an overweight panda overcoming the odds and becoming an unforgettable, dexterous ninja. There you have it folks: a rookie given a nickname for his cartoonish agility that is rich in imagery and narrative. And a pretty darn creative one that moved the Giants nation to purchase (at $30 a pop) and sport that magical panda hat like we were 10 years old again.

In 2009 Ben Zobrist had a breakout year with a .297 batting average and 27 long balls (or as we like to call them in San Francisco, “souvenirs”). Zobrist came out destroying any timid ball that came across the plate. It is not hard to imagine why the former Tampa Bay Rays manager Joe Maddon nicknamed him, “Zorilla.” The 2009 All-Star caliber year may have unconsciously implanted the seed that lead to Maddon spurting out to beat writer Marc Topkin “here’s ZO-brist…[the] ZO-rilla.” [3] 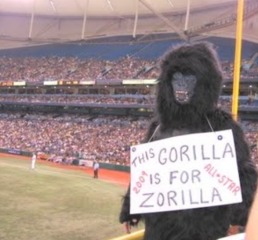 As history has it, Zorilla finished eighth that year in the American League Most Valuable Player ballot—a monstrous year indeed for the switch-hitting utility player. Zorilla is no stranger to nicknames. He was also referred to as “Zobi Wan Kenobi,” “Zoby,” “Zo” and a few others.[3] You can even catch the Rays selling Zorilla tees and bobbleheads at the ballpark.

In my opinion, Zorilla would make a great addition to the wild animals of AT&T Park, but some people have another destination in mind. [4]

The list of nicknames is a large one that is colorful in name and backstory. To say they are lazy and boorish is an unwarranted statement. Imaginative names describing the old Spittin’ Bills and Fat Freddies are out there, just look to our present-day Big Papis and Freaks.[5]

So my question to you is: Are modern nicknames truly lacking in creativity or are critics selling us short? More importantly, should nicknames carry forward when a player leaves the team? As a diehard Giants fan, I considered the same question and with great angst I can only reply… maybe. Does a panda always remain a panda or do red stockings create a whole other creature? I leave it up to you to answer this pickle.

[2] For a longer list of nicknames check out: http://www.baseball-reference.com/friv/baseball-player-nicknames.shtml