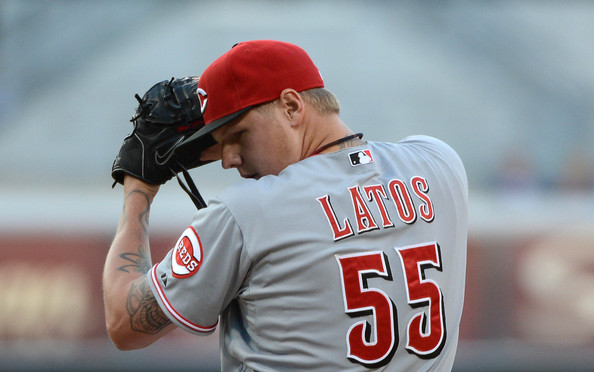 The Cincinnati Reds have traded starting pitcher Mat Latos to the Miami Marlins.

Over six big league seasons, Latos has accumulated a very solid 3.34 ERA, 1.168 WHIP, and a 3.04 K/BB ratio. If he is healthy, there’s no reason Latos shouldn’t return to form as a front-of-the-rotation starter.

He is projected to earn $8.4 million in his third and final year of arbitration eligibility before hitting the market as a free agent after the 2015 season.

In return for Latos, the Reds received right-handed starter Anthony DeSclafani and catcher Chad Wallach from the Marlins.

DeSclafani, 24, is the prime piece coming back to the Queen City. The right-hander entered the season as the Marlins #5 prospect according to Baseball America and made his major league debut in May.

The rookie struggled in 13 appearances – including five starts – going 2-2 with a 6.27 ERA and a 1.364 WHIP. Those numbers are accompanied by a very promising 26/5 K/BB ratio over 33 total innings and a FIP of 3.77, indicating bad luck may have inflated his ERA.

DeSclafani has a solid minor league track record having gone 26-19 with a 3.23 ERA, 1.239 WHIP, and 304/79 K/BB ratio over three seasons. He projects to be a solid mid-rotation starter for the Reds going forward.

It’s hard to tell on the surface if this move – coupled with the acquisition of Dee Gordon and Dan Haren and speculation about Justin Morneau – is a sign the Marlins are getting serious about a playoff push in 2015.

Or if this move—coupled with today’s trade of Alfredo Simon—is more indicative of the Reds beginning a fire sale on all soon-to-be free agents to acquire future value in return.

Latos is likely to earn big bucks on the open market, so it makes sense for Cincinnati to move him now if they had no intention of signing him to a $100+ extension.

The Marlins now have a year to convince Latos to sign with them long-term, before he hits the market.

Given the contracts we’ve seen doled out this year, it’s hard to imagine Latos passing up a shot at that kind of payday next offseason.