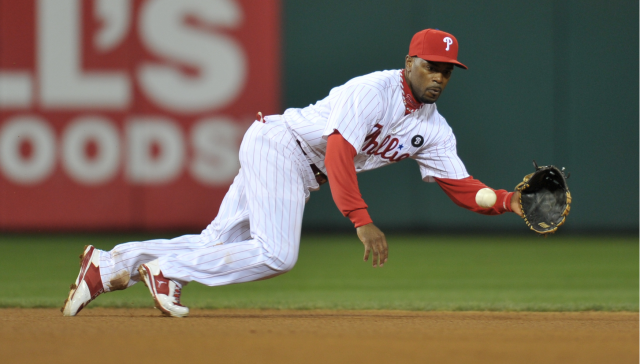 Confirmation of the deal comes from ESPN’s Buster Olney after the trade came together quickly this afternoon, seemingly spurred by comments from Rollins indicating that he would approve a trade to Los Angeles.

Having spent his entire 15-year career with the Phillies, Rollins had earned ten-and-five rights giving him full no-trade protection. It is believed that he already vetoed a trade to the Mets earlier this offseason.

Rollins, 36, has one year and $11 million remaining on the four-year, $44 million contract he signed with the Phillies prior to the 2012 season.

In addition to a still-potent bat, Rollins has both scouts and advanced metrics in agreement that he’s still one of the better defensive shortstops in the game.

Los Angeles was in the market for a shortstop after losing Hanley Ramirez to the Red Sox in free agency, but it was believed the club would fill the vacancy internally.

Following Rollins’ comments this afternoon, it seems that the opportunity to acquire the 2007 National League MVP and three-time All-Star was clearly too good to pass up.

In addition to still being a valuable asset on the field, Rollins also serves as a stopgap that allows the Dodgers to give top prospect Corey Seager another year in the minors before he takes over as the club’s everyday shortstop in 2016.

The arrival of Rollins may expedite a potential trade of speedster Dee Gordon to allow for internal candidates Alex Guerrero, Erisbel Arruebarrena, Darwin Barney, or Justin Turner to take over at second base.

As for Rollins, the Dodgers obvious vacancy at shortstop and potential to win a World Series likely played a role in his approving the trade and leaving the Phillies after 15 seasons.

Rollins, perhaps more than any other member of the club, appeared poised to stick around until the end of his deal. His departure would seem to signal that the Phillies front office waving the white flag and finally succumbing to the need to tear down and rebuild the club’s roster.

Following a tremendous run from 2006-2011 that saw Philadelphia win five consecutive National League East championships, two NL pennants, and one World Series; the Phillies have regressed hard as an aging core and injuries saw the club fall to third, fourth, and fifth place in the NL East from 2012-2014.

Between now and spring training, we can expect general manager Ruben Amaro to look for avenues to move starters Cole Hamels and Cliff Lee, outfielders Marlon Byrd, Ben Revere, and Dominic Brown, closer Jonathan Papelbon, catcher Carlos Ruiz, and infielders Chase Utley and Ryan Howard. All of whom have big contracts and/or the potential to bring back much needed prospects in a trade.

It’s not known who the Phillies will receive in exchange for Rollins at this time.