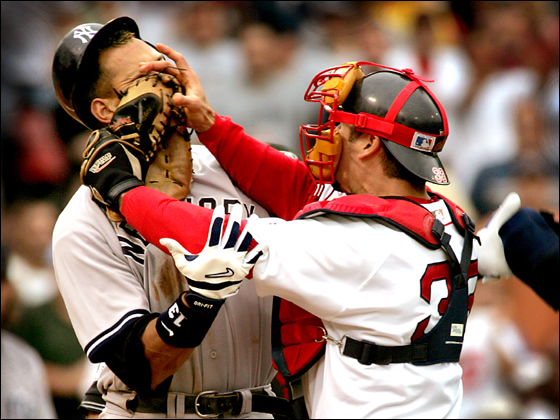 There is no rivalry in sports more storied than the New York Yankees and Boston Red Sox—or so ESPN tells me, constantly—and with that type of long-term, history-laden rivalry comes some serious battle lines, right?

Literally hundreds of books have been written on the subject.

More ink (or is it pixels) have been spilled over this rivalry in newspapers and online than any other in all of sports. In fact, it’s pretty safe to say that this rivalry alone has kept some sportswriters employed.

The rivalry has its own freakin’ Wikipedia entry and a YouTube search for “Yankees vs Red Sox” yields nearly 10,000 results.

Heck, there’s an entire television network dedicated to preaching the prominence of this rivalry.

We’re talking about the type of rivalry that divides families and tears friendships apart.

People have legitimately been beaten and killed as a result of their respective allegiances in this century-old rivalry.

With that in mind you’ve got to think that there is absolutely no reason for something like this to happen: 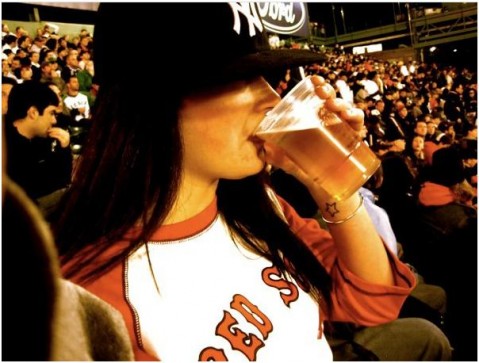 As much as I hate to give either the Yankees or Red Sox any more press, I can’t help but ask myself, what the heck is going on here??

I’ve been in those bleachers at Fenway, I’ve been booed unmercifully by an entire section on more than one occasion for wearing Minnesota Twins gear and—on one fateful day—a vintage Tampa Bay Devil Rays t-shirt.

I’ve been to a Sox/Yankees game and seen fight after fight breakout over nothing more than someone doffing the cap of the visiting team.

So explain to me, how is it that this gal’s transgressions are allowed to pass unscathed, by either party.

I would be content if a band of rogue New York fans rose up in arms to slay her with weapons they’d fashioned from those miniature souvenir baseball bats.

I’d be equally approving if the usual Fenway bleacher creatures were to use her as a ritual sacrifice to Jon Papelbon before the ninth (they do that you know).

What I can’t stand is for this to pass, seemingly without any sort of repercussion. She’s just enjoying a beer and watching the game. What the heck is that?

I had a beer vendor refuse to serve me the day I wore the Devil Rays shirt and this is all peachy?

Let’s hear it folks, what’s your take on the situation?

Is she part of some sort of government test study to determine how long a cute gal can survive in hostile conditions?

Has she had too many of those $8 Budweisers and accidentally grabbed the wrong hat (or shirt) on her way out of the powder room?

Or does she simply work for ESPN?

I am a professional library dude, a cheeseburger enthusiast, a wannabe writer, a slow-pitch softball center fielder, an avid hunter (of churros), a cat-person, and -- hopefully -- one of your two or three favorite Iowans.
View all posts by Jeremiah Graves →
This entry was posted in AL East, American League, Baseball, Boston Red Sox, Cheap Seat Chronicles, MLB, New York Yankees. Bookmark the permalink.