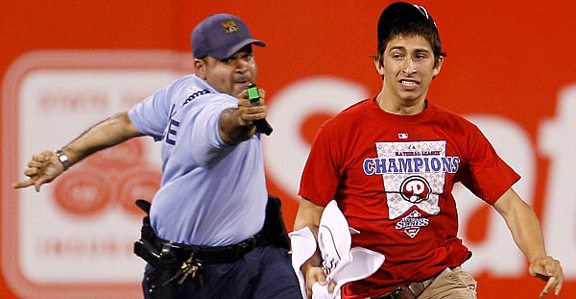 When the action on the field grows tiresome too many fans decide to create their own entertainment.

That was the case last night in Philadelphia where a 17-year-old Phillies fan hopped the fence and ran onto the field during the eighth inning.

At the time the Phillies were down 6-2 after giving up a five-run inning to the St. Louis Cardinals. This apparently was enough to encourage the young fan—whose name has yet to be released because he is a minor—to make his own entertainment.

The fan jumped the fence and led two officers on a chase around the outfield at Citizens Bank Park in front of a reported 44,817 screaming fans.

The security officers eventually ended the chase when one of the men pulled out a Taser and “subdued” the 17-year-old.

According to both teams, this is the first time a Taser has ever been used to apprehend a trespasser during a game.

Phillies spokeswomen Bonnie Clark said the police department is investigating the matter and discussing with the team whether using the stun gun was appropriate.

Police spokesman Lt. Frank Vanore told The Philadelphia Inquirer police internal affairs will open an investigation to determine if the firing “was proper use of the equipment.”

The 17-year-old will be charged with trespassing and likely suffering years of public humiliation amongst his friends.

After an incident like this, one can’t help but wonder if this is taking things too far.

In the past, officers would make a half-hearted attempt to catch the trespasser and more or less wait until they would run themselves out of energy.

At which point they’d simply escort them off the field and off to spend the evening in jail. Who knew that those were simpler times?

I’m all about keeping people off the field, but the Taser seems just a bit extreme given that this guy was clearly not a threat to anyone on the field.

Let’s hear it in the comments folks, what do you think?

Was the use of a Taser too much or is it a sufficient means of crowd control in this type of situation?

I am a professional library dude, a cheeseburger enthusiast, a wannabe writer, a slow-pitch softball center fielder, an avid hunter (of churros), a cat-person, and — hopefully — one of your two or three favorite Iowans.
View all posts by Jeremiah Graves →
This entry was posted in Baseball, Cheap Seat Chronicles, MLB, Philadelphia Phillies. Bookmark the permalink.