Minnesota Twins reliever Pat Neshek is best-known for his funky sidearm delivery and his blog.

Fans haven’t seen much of his delivery of late as he hasn’t tossed a pitch since arm troubles and an eventual go’round with Tommy John Surgery sidelined the hurler early in the 2008 campaign.

Neshek is throwing again and expects to make a successful comeback this season.

His prognosis is good thus far and a healthy and effective Neshek would go a long way toward stabilizing the back-end of what figures to be a very good Minnesota bullpen this season.

Neshek feels confident he’ll be healthy and has been giving arm updates on his aforementioned blog.

What they’ll also find on the blog is this gem of a “fan letter” posted on Thursday: 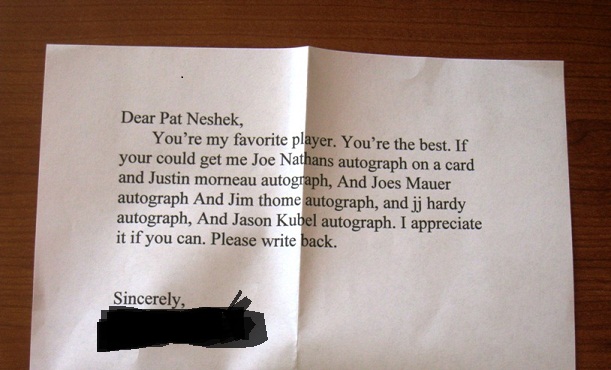 Apparently Neshek—known for being very fan-friendly and a big advocate of autographs and autograph collecting—receives letters of this ilk with some regularity as he handled it with a sense of humor saying:

“For some reason I feel like he’s lying about me being his favorite player!”

The worst part of it all is that the letter was probably written by one of the parasites in the memorabilia business posing as a child.

Autograph poachers are some of the worst people in the world. These are the creepy guys in their 40s that you see elbowing kids out of the way at baseball games to get six or seven autographs, all on fresh white baseballs.

They’re pretty recognizable as they all look like the Comic Book Guy from The Simpsons, albeit usually in a baseball t-shirt of some type.

Either way—whether it really is from a small child who should probably re-take “Keyboarding 101” next fall or some autograph poacher—this pretty much has to qualify as the worst piece of fan mail of all-time.

I am a professional library dude, a cheeseburger enthusiast, a wannabe writer, a slow-pitch softball center fielder, an avid hunter (of churros), a cat-person, and -- hopefully -- one of your two or three favorite Iowans.
View all posts by Jeremiah Graves →
This entry was posted in Cheap Seat Chronicles, Injuries, Minnesota Twins, MLB, Pat Neshek. Bookmark the permalink.