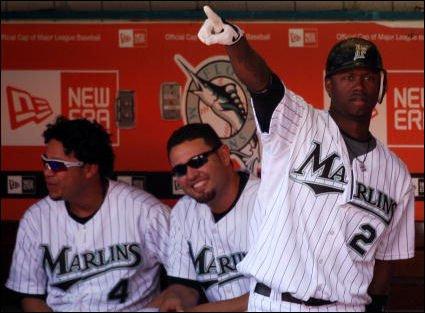 The Florida Marlins are adding payroll, whether they like it or not.

That is the agreement that Major League Baseball and the players’ union have come to after years of watching Marlins’ owner Jeffrey Loria line his pockets with money from baseball’s revenue sharing system, an act which would be in violation of the revenue sharing provisions.

According to MLB’s Basic Agreement, any club that receives money via revenue sharing is committed to use those funds “to improve its performance on the field.”

The Marlins clearly haven’t been doing that as the club’s payroll has been the lowest in MLB in three of the past four seasons.

The club’s payroll topped $40 million just four times in the last decade and has only exceeded $46 million once over the same time period.

Poor attendance is often pointed to as the main culprit, but the Marlins are due to open a new ballpark in 2012, the same year the payroll agreement ends.

Club spending typically increases with the opening of a new stadium, but the commissioner’s office and the union wanted the Marlins to reinvest more of their revenue sharing profits into the on-field product prior to the opening of the new field.

The agreement doesn’t state a mandated minimum salary for the club, but it is believed that the payroll will increase significantly beyond the roughly $37 million the team spent last season.

Despite operating with a shoestring budget, the Marlins finished in second-place in the National League East, while the New York Mets were fourth even with a payroll of $136 million.

As such, it isn’t too far-fetched to believe that this “punishment” could turn into a blessing for the Marlins.

The club can now build a winning ballclub prior to the move across town in two years.

Second baseman Dan Uggla, has been the subject of trade rumors all offseason long and interest has been tepid at best.

Much of this is Uggla’s own doing after publicly stating an unwillingness to move his atrociously bad glove to a position other than second base.

The club can now afford to keep Uggla, 29, who figures to make upwards of $7 million in arbitration this winter. This allows the Marlins to either lock up the slugging second baseman long-term or move him later when the market for his services has improved.

Earlier this offseason the then-stingy Marlins were near an extension with the 25-year-old Johnson, but balked when Johnson’s agent asked for a fourth-year on the deal.

The club would be wise to jumpstart negotiations with Johnson regarding an extension as the balky right-hander could anchor the Marlins staff well into the next decade if the club is smart enough to keep him around.

A third name that hasn’t been brandied about nearly as often is Ricky Nolasco.

The right-hander was the club’s Opening Day starter in 2009 before ineffectiveness relegated him to the minors for a brief midseason stint.

Nolasco, 27, has shown flashes of brilliance throughout his career and pairs up nicely with Johnson at the head of the club’s rotation.

If the season started today the Marlins’ payroll, factoring in arbitration raises, would be somewhere between $40-$50 million.

That figure may be all the higher the club is willing to go, but with a new ballpark only two seasons away and the club on the brink of contending it wouldn’t be unheard of to see the Marlins alter course and make some splashes.

With plenty of free agents still available, and many willing to sign at a discounted rate to ensure employment, the club could go bargain-shopping and lock up in-house talent at the same time.

In doing so, the Marlins would become immediate favorites for the Wild Card and a dark horse candidate to unseat the Philadelphia Phillies in the NL East.

The other option is that the Marlins will simply comply with the “punishment” and spend the necessary dollars to appease MLB and the players’ union.

Either way, one thing is certain, the 2010 Marlins will have more money invested into the on-field talent; a fact which should create for a more competitive ballclub and may have the rest of the National League wondering who is really getting punished.