Posted on December 8, 2009 by Jeremiah Graves 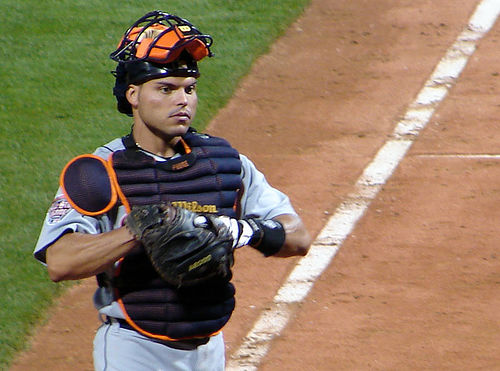 According to Tim Brown of Yahoo! Sports, Ivan Rodriguez has reportedly agreed to terms on a two-year, $6 million deal with the Washington Nationals.

Many wondered if Rodriguez—a future Hall of Famer—would accept arbitration after a contentious offseason a year ago.

Last offseason, Rodriguez struggled to find a suitor willing to take on his services. An excellent showing for Puerto Rico in the World Baseball Classic in March netted him a one-year, $1.5 million deal with Houston.

Rodriguez, despite coming off one of the worst-seasons of his career, felt confident enough to reject the Rangers’ arbitration offer and venture onto the free agent market yet again.

Washington promptly proved his confidence was not unfounded.

Rodriguez will take over as the club’s primary backup and mentor to Jesus Flores. Flores is recovering from surgery on his right shoulder and elbow, but is expected to be ready to play by Spring Training.

The signing of “Pudge” essentially ends the tenure of backup catcher Wil Nieves, who is arbitration-eligible for the first time. He is now expected to be non-tendered before Saturday’s deadline.

Rodriguez figures to be the perfect mentor to Flores as he has played in 14 All-Star Games and won 13 Gold Gloves, the most by a catcher and tied for fourth most overall. In 1999 he was named the American League’s Most Valuable Player. He also has more career runs, hits, and doubles than any other catcher in Major League history.

Additionally, he has been part of major organizational turnarounds with the Florida Marlins in 2003 and the Detroit Tigers in 2006.

He doesn’t figure to have that type of impact on the lowly Nationals, but he will certainly be a great presence in the clubhouse and a good example for a relatively young and impressionable roster.

That is assuming, of course, that none of the four are traded this offseason.

Washington will mark Rodriguez’s sixth different team, and fourth in two years. The two-year deal does, however, offer a sense of stability and reassurance that is hard to find for aging catchers.

It is curious as to why the Nationals would give a two-year deal worth $3 million a year to an over-the-hill backup, when Nieves could have served purpose at a much cheaper cost.

It could be perceived as a sign that general manager Mike Rizzo isn’t confident that Flores will be fully-recovered by Opening Day and the club wants to have a reliable Plan B in place.

Rodriguez appeared behind the plate in 115 games last season and proved he could still carry the bulk of the catching load if necessary.

It is also entirely possible that Rizzo wanted a reliable backstop and mentor for Flores and didn’t see a better option on the market and was willing to overpay to lure Rodriguez to Washington.

Whatever the case may be, the Nationals have some stability and insurance behind the plate and “Pudge” Rodriguez is guaranteed at least two more years in the sun.

I am a professional library dude, a cheeseburger enthusiast, a wannabe writer, a slow-pitch softball center fielder, an avid hunter (of churros), a cat-person, and -- hopefully -- one of your two or three favorite Iowans.
View all posts by Jeremiah Graves →
This entry was posted in Baseball, Cheap Seat Chronicles, Free Agency, Ivan Rodriguez, MLB, MVP, Washington Nationals. Bookmark the permalink.