Sheamus: Too Much, Too Soon

Posted on December 7, 2009 by Jeremiah Graves 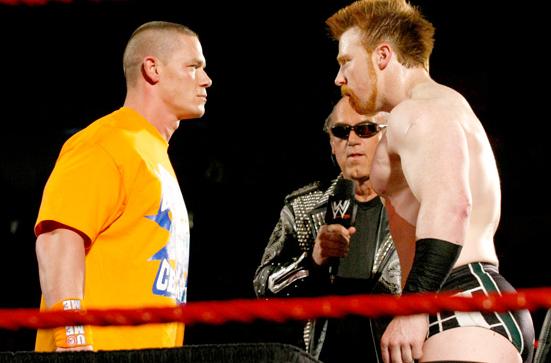 The WWE is completely botching the push of Sheamus.

I’ve made it clear in the past how I feel about the WWE’s initial build of Sheamus and I still hold the same feelings.

The company has done nothing to adequately build Sheamus as a main event talent and—aside from one cheap-shot and bodyslam—we’ve seen him show nothing in the ring against John Cena.

I’ve got absolutely no problem with the WWE pushing new talent.

I ranted and raved about the direction the company took with Kofi Kingston and I am a converted fan of the way CM Punk is being slowly built as a major heel after his initial quick turn.

Those facts notwithstanding, I still feel that the company is doing itself and Sheamus a major injustice by tossing him into the main event scene.

No one in their right mind actually expects Sheamus to win the title at the upcoming TLC pay-per-view because to the average viewer Sheamus is a nobody.

Since his debut on RAW, just six short weeks ago, we’ve seen Sheamus squash Jamie Noble, dominate a stagehand, kick Jerry Lawler in the face, beat the 600-year old Finlay, win a battle royal in which he avoided confrontation for the majority of the match, cheap-shot John Cena and put him through a table, and we saw him squash Santino last week.

I know all of this so well, because the WWE has been showing video montages almost non-stop to try and prove to viewers that Sheamus is a main-eventer and worth paying $40 to watch on pay-per-view.

The montages, entitled “The Celtic Warpath,” fall short, because all they show is Sheamus beating up on jobbers and non-wrestlers.

Sheamus has been incredibly overmatched on the microphone and appeared weak by not physically confronting Cena.

The build-up figures to be strong over the remainder of the week to convince viewers that Sheamus could win the match by putting Cena through a table and his brute strength might be all he needs.

They’ll undoubtedly pimp the fact that Sheamus doesn’t have pin Cena or make him submit, all he needs to do is toss him through a table, which he’s already done.

If they’re smart, they’ll have Sheamus obliterate Cena in the “Championship Showdown” at the end of RAW and put him through a table once again, thus proving that Sheamus has what it takes to win the title.

Here’s the problem, even if they build up Sheamus enough to make him seem like a viable number one contender for this Sunday, what comes next?

If Sheamus loses this Sunday, he’ll probably get a one-night rematch on RAW, but any legitimate shot he has at being a main-eventer goes down the toilet with the pay-per-view loss.

John Cena was in a similar situation back in 2003 when he was pushed into a main event program with Brock Lesnar. There was minimal build and an obvious loss at Backlash.

It took Cena two years to legitimately work his way back into the main event picture.

The Miz suffered a similar fate earlier this year when he and Cena had a small feud. Miz appeared to be gaining some real steam before Cena squashed him in multiple matches and forced a dramatic re-boot of his entire persona.

Six months later, he’s the United States Champion, but is currently not on the radar for a main event push any time in the near future.

Sheamus can lose the match and, at best, attempt to carry the feud into the Royal Rumble before returning to the mid-card as an apparently failure at the upper echelon.

The alternative is to have Sheamus win the WWE Championship this Sunday.

It is feasible that the WWE could have Sheamus win the title without making Cena look too bad, thanks to the stipulations of the match, but then what?

Sheamus won’t be the WWE Champion at WrestleMania 26, that’s for sure. Any potential title reign would undoubtedly be a short one, after which he would once again return to the mid-card.

Either way you look at it, the end-game is the same. Sheamus returns to the mid-card and John Cena moves into a program that builds for WrestleMania.

I’m glad that the WWE didn’t shove another Cena vs Orton/HBK/Triple H match down our throat, but pushing Sheamus this quickly with no real resume to speak of only hurts themselves (buyrates) and Sheamus (potential) going forward.

Hopefully, the WWE will learn their lesson when, in six months, Sheamus has become another Kane. No longer an unstoppable monster, but rather just a big, bad heel who is occasionally thrown into title matches that he’ll never win.

For Sheamus it’s just too much, too soon.

I am a professional library dude, a cheeseburger enthusiast, a wannabe writer, a slow-pitch softball center fielder, an avid hunter (of churros), a cat-person, and — hopefully — one of your two or three favorite Iowans.
View all posts by Jeremiah Graves →
This entry was posted in Cheap Seat Chronicles, Professional Wrestling, Sheamus, WWE, WWE RAW. Bookmark the permalink.

1 Response to Sheamus: Too Much, Too Soon