Carlos Lee: Plan-C for Losers of the Bay and Holliday Sweepstakes 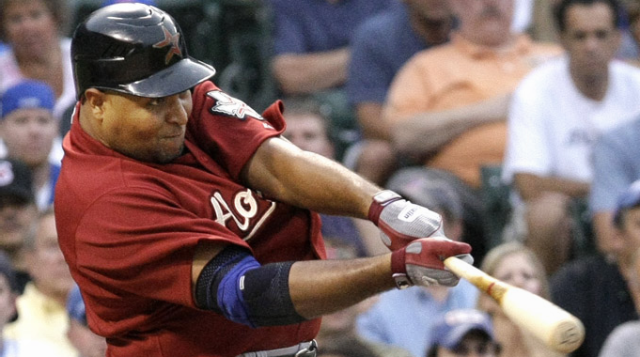 Houston, you have a problem.

Your ballclub is bad, really bad.

The Astros—a perennial contender for much of the last decade—have fallen on hard times.

From 1994 to 2006, Houston was one of the most competitive clubs in the National League.

During that twelve-year run the Astros finished lower than second-place just once, in 2000, when the club played sub-.500 baseball for the first time since ’92.

The club made the playoffs six times in that stretch and won the National League pennant in 2005 before falling to the Chicago White Sox in the World Series.

As it stands, 2005 was the Astros last trip to the postseason.

Since that magical October, the franchise has been backpedalling into obscurity in the NL Central.

That may be a hard pill to swallow given that the Astros have been one of baseball’s most successful franchises since he became owner, but those days are quickly fading in the rearview mirror.

Even during the club’s successful run, McLane bullied his general managers and has all-too often relied on an aging roster of overpaid stars. It seems that McLane’s formula has finally come back to haunt him.

Despite possessing great young players like Michael Bourn, Tommy Manzella, and Hunter Pence the average age of the ballclub is slightly more than 31-years-old.

To put it in perspective, the closest team in the NL Central age-wise is Milwaukee at 29.65 years old, a number which figures to go down significantly now that Braden Looper and Mike Cameron—35 and 36, respectively—are no longer with the club.

The Astros are old and overpaid and until McLane allows general manager Ed Wade to move the contracts of his aging, yet still-talented, veterans, the club is going nowhere.

The obvious solution would be trade the likes of Roy Oswalt, Lance Berkman, and Carlos Lee while they still have trade value.

As such, I’ve decided to take a look at the man who is probably the most valuable of the three, Carlos Lee.

Carlos Lee is one of baseball’s premier left fielders.

Offensively, that is; with the glove, not so much.

Lee, 33, has also shown an ability to play in markets of all-sizes, as the Astros are his fourth team big league club.

Lee has three years and roughly $55.5 million remaining on his contract. As such, he’s really only in play for big market clubs willing to absorb an $18.5 million hit in each of the next three seasons.

Despite the limited trade partners, he still could find a home with whichever team loses out on signing top free agents, Jason Bay and Matt Holliday.

Holliday, 30 on Opening Day, is obviously the cream of the crop as he’s defensively the best of the three and still shows some speed on the bases. Going against Holliday, however, is the fact that he didn’t do much to impress during his short stint in the American League earlier this season.

Bay, 31, comes in a close number two on this year’s market. Unlike Holliday, he has come up big in both leagues and is considered by many to be a more complete player than Holliday.

And then there is Lee.

Lee has plied his trade in both leagues and been successful in every stop along the way. His speed on the bases has dwindled significantly in recent seasons and with it he’s lost some of his outfield range.

Any team that’s looking to sign Bay or Holliday will admit that they’re willing to sacrifice some defense for the offensive prowess those players bring and Lee would fit the bill in that regard.

Dollar figures for Bay and Holliday are only estimates right now, but it is believed that Scott Boras is looking for “Mark Teixeira money” for Holliday.

Teixeira’s monster eight-year, $180 million deal paid him $20 million this year and he’ll earn another $20 million next season. After that he will make $22.5 million per season for the six years that follow.

Depending on which rumors you believe, Bay is believed to be looking for a five-year deal with a base salary falling anywhere in the $15-$20 million range.

With that in mind, Carlos Lee offers an intriguing Plan-C for clubs that ultimately lose out on the Bay/Holliday sweepstakes.

Lee also offers a measure of flexibility, that neither Bay nor Holliday can match.

Rather than getting bogged down to a long-term deal, any team that acquired the slugger would only be on the hook for three years.

He will probably be overpaid at $18.5 million for the next three seasons, but he’ll offer production comparable to both Bay and Holliday at—what figures to be—a lower price.

Lee has a full no-trade clause that doesn’t expire until the end of 2010, but one would have to assume Lee would accept a trade to a big-market contender that would give him a realistic shot at winning a World Series.

Many clubs meeting that description have been linked to both Bay and Holliday.

When it’s all said and done, only two clubs will land a top free agent left fielder and that’s when McLane needs to let Wade open up trade talks.

Despite the big money another club would be taking on, the Astros could still expect to receive at least one top prospect in any trade, in addition to mid-level prospects to help replenish a farm system that has grown relatively thin in recent years.

Additionally, depending on how desperate the loser(s) of the Bay/Holliday sweepstakes is/are the Astros could potentially receive a package of multiple top-tier prospects, in addition to the obvious payroll relief that trading Lee would provide.

In the end, the Astros may—and probably will—go with the status quo and continue to rely on aging veterans like Lee, Berkman, and Oswalt long beyond the point where they could reap a major return.

There is, however, an opportunity to strike while the iron is hot and move all three to clubs willing to pay big bucks over a shorter time period than most free agents will command.

The Astros can—and should—restock the farm system now, save some serious coin, and prepare for the next stretch of great Astros baseball.

The opportunity is there, but the window is closing.