Seven Reasons Why the Twins Should Bring Back Joe Crede

Posted on November 9, 2009 by Jeremiah Graves 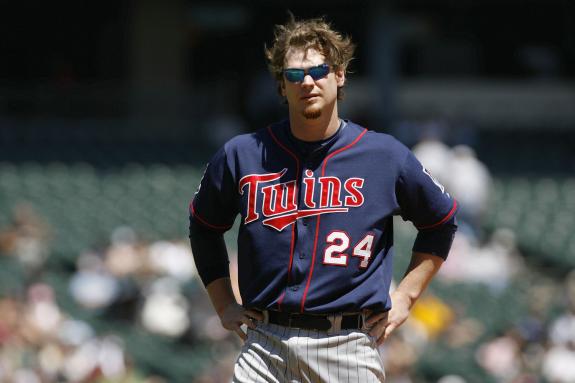 In the last week alone, Smith was rumored to be in on a deal for new Pittsburgh second baseman Akinori Iwamura, he traded away Carlos Gomez for J.J. Hardy, he exercised Michael Cuddyer’s $10.5 million option for 2011, and he’s watched as a handful of players from the 2009 squad filed for free agency.

Without a doubt, the Twins are deeply embroiled in the Hot Stove Season, less than a week after the completion of the World Series.

As such, today I’m going to dive right into the mix with a look at the seven reasons why the Minnesota Twins should to bring back Joe Crede.

1) The Price is Right

After yet another injury-plagued season and a third back surgery in as many years, Crede’s price hasn’t exactly skyrocketed out of the Twins’ reach for next year.

In 2009, Crede signed a deal with a base salary of $2.5 million with award bonuses that pushed the total value to $7 million. He figures to command a similar deal again next season.

With Crede coming off of back surgery again, his market could, once again, be slow to develop.

This would be a great time for the Twins to move in and sign the third sacker for another season with a very similar incentive-laden contract.

2) He Owns the Opposition

In his career against the rest of the American League Central (note: the White Sox are omitted from these numbers because of the small sample size) Crede has had plenty of success.

Most of that damage has come against the Tigers, arguably the Twins’ biggest competition for the AL Central crown in 2010.

The Twins eschewed tradition in 2009 as four different players hit 28 or more home runs. The “small ball” label may never leave the franchise, but bringing in another potent right handed slugger couldn’t hurt the cause.

Cuddyer is in the only other non-lefty amongst the Twins’ mashers and it is widely believed that both Cuddyer and Mauer will each take a step or two back in the power department next season.

If that is the case, keeping a right-handed slugger like Crede around serves two purposes. It adds some serious right-handed punch to the lineup and, secondly, it breaks up the lefties in the lineup to keep opposing pitchers on their toes.

Crede made it very clear in interviews that he enjoyed his time with Minnesota and would love to return to the Twin Cities for an encore performance in 2010.

The rest of the ballclub took to Crede as well. Many of the Twins’ players commented on how hard he played the game and also made mention of the incredible defensive presence he brings to the game.

Where I come from if a guy can be had for the right price, offers the right production, and wants to come back, it’s a no-brainer.

5) He Looks Good in Leather

Joe Crede has built up a reputation throughout his career as being one of the best defensive third basemen in all of baseball. He did nothing to take away from that reputation in 2009.

He posted a 23.4 UZR/150 last season, the second-best of his career and the best in all of baseball.

An infield that combined Crede with defensive whiz-kids J.J. Hardy and Nick Punto would be among the best in the league.

Joe Crede is not a long-term solution at the hot-corner. Crede knows this and the Twins know this. He is, however, a great short-term solution given what the Twins have waiting in the wings.

Danny Valencia, 25, is the Twins top prospect in the minor leagues right now and after hitting .299/.354/.480 over three and a half seasons in the minors, why wouldn’t he be.

The Twins view Valencia as the third baseman of the future, but given that he wasn’t called up in September, some are wary about whether or not he will be ready for the job out of Spring Training.

If the Twins bring back Crede, he can man the position for the first half of the season, allowing Valencia more time to mature at Triple-A Rochester before making the transition to the majors.

Joe Crede could be brought back to serve as the team’s third baseman for the beginning of the season and the club could then slowly bring Valencia into the mix.

In doing so, they would have a safety-net should Valencia falter and they would be able to provide Valencia—an average defender—with a mentor.

Crede clearly knows a thing or two about playing the hot corner and playing it well. He could serve as a mentor to Valencia and teach him the finer points of defense.

If Crede is able to put up the numbers he did this season and play roughly as many games, it would work perfectly toward passing the torch to Valencia moving forward.

Additionally, if Crede is gone that leaves Nick Punto to mentor Valencia.

Granted, Punto may be a plus-defender at the hot corner, but does anyone really want one of the franchise’s cornerstones of the future learning anything from Nick Punto?

I am a professional library dude, a cheeseburger enthusiast, a wannabe writer, a slow-pitch softball center fielder, an avid hunter (of churros), a cat-person, and — hopefully — one of your two or three favorite Iowans.
View all posts by Jeremiah Graves →
This entry was posted in AL Central, Baseball, Cheap Seat Chronicles, Free Agency, Injuries, Joe Crede, Minnesota Twins, MLB. Bookmark the permalink.