Scott Hairston: Movin’ on Up (the Coast) 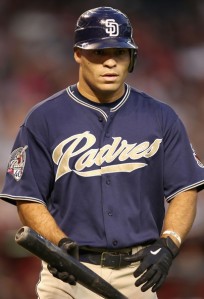 In an attempt to add some power to an otherwise lackluster lineup, the Oakland Athletics traded two minor leaguers to acquire Scott Hairston from the San Diego Padres today.

Hairston was hitting .299 with 10 home runs and 29 RBI in 55 games. Those numbers make him an immediate upgrade to an Athletics lineup that has lacked a real power source this season despite bringing in sluggers Jason Giambi and Matt Holliday in the off-season.

In the trade the Padres receive a pair of minor league pitchers and a player to be named later. The two pitchers, Ryan Webb and Craig Italiano, figure to provide some future insurance for the Padres rotation if the team succeeds in trading Jake Peavy.

To read the rest head to BleacherReport.

I am a professional library dude, a cheeseburger enthusiast, a wannabe writer, a slow-pitch softball center fielder, an avid hunter (of churros), a cat-person, and — hopefully — one of your two or three favorite Iowans.
View all posts by Jeremiah Graves →
This entry was posted in AL West, Baseball, Cheap Seat Chronicles, NL West, Oakland Athletics, San Diego Padres. Bookmark the permalink.