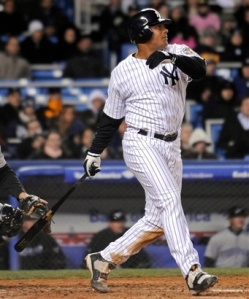 According to reports, the Los Angeles Angels are nearing a one-year deal with free-agent outfielder Bobby Abreu. If these rumors prove to be true this will be a win-win-win for all parties.

Bobby Abreu would gain a chance to join a contender and contribute immediately in much the same manner as Mark Teixeira did late last season. Abreu is a proven hitter who, despite his diminishing power, can still be a big contributor in the middle of a lineup.

A left-handed hitter, Abreu is a career .300 hitter and has a career OBP of .405. Teixiera, although six years younger, has career numbers of .290 and .378 respectively. As such, the deal also makes plenty of sense for the Angels who are looking for someone to replicate the production lost when Teixeira signed with the Yankees.

The downside to this deal is that the Angels would be adding to the surplus of outfielders with limited defensive ability and range. Currently the Angels have Torii Hunter, Vladimir Guerrero, Juan Rivera, Gary Matthews and Reggie Willits in their outfield/designated hitter cluster. Abreu would only further clog up that rotation, but could allow the Angels to move Matthews or Willits.

The third party helped out in this situation is the remainder of the free-agent class. If the Angels sign Abreu it would make remaining free agents such as Adam Dunn, Manny Ramirez, Ken Griffey Jr. and Joe Crede all the more valuable to clubs in need of an impact bat as the market would lose one of the few remaining game-changers available.

Whether this deal actually goes down or not, this is definitely the type of signing that would make plenty of sense for all sides.

I am a professional library dude, a cheeseburger enthusiast, a wannabe writer, a slow-pitch softball center fielder, an avid hunter (of churros), a cat-person, and — hopefully — one of your two or three favorite Iowans.
View all posts by Jeremiah Graves →
This entry was posted in AL West, American League, Baseball, Bobby Abreu, Free Agency, Los Angeles Angels. Bookmark the permalink.